Cookie Notice
We use cookies for analytics, advertising and to improve our site. You agree to our use of cookies by closing this message box or continuing to use our site. To find out more, including how to change your settings, see our Cookie Policy
We've detected you are on Internet Explorer. For the best Barrons.com experience, please update to a modern browser.

This copy is for your personal, non-commercial use only. To order presentation-ready copies for distribution to your colleagues, clients or customers visit http://www.djreprints.com.

Baby Boomers in No Rush to Retire 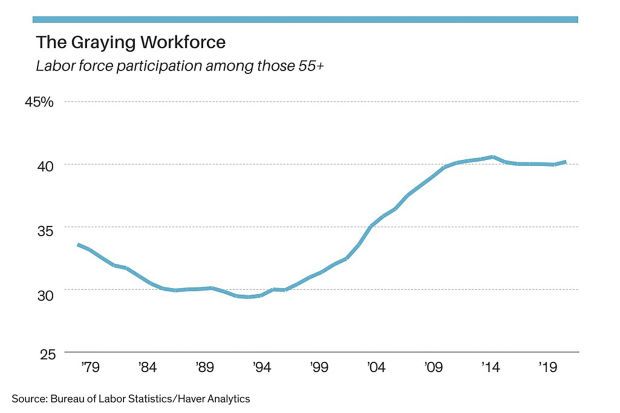 That forecast was made nearly 20 years ago by demographer Peter Francese in a Barron’s cover story, ("A Big New Wrinkle," Sept. 6, 1999). Data through April 2019 reveal that it’s largely come true. 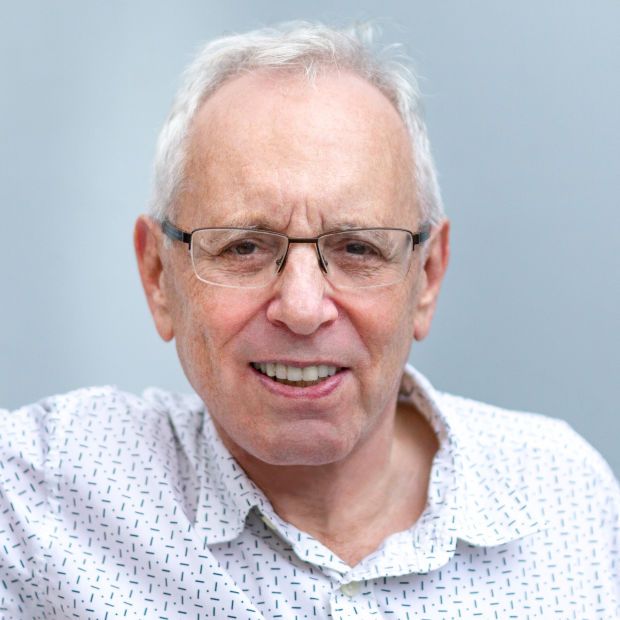 In 1999 (see chart above), the share of the civilian population 55 and over who remained in the labor force, technically known as the labor force participation rate, came to 31.8%. The boomers were not yet part of the 55+ cohort, since they were born between 1946 and 1964, which meant they ranged in age from 35 to 53.

In the current year 2019, however, all boomers will be of the age when people start to retire in appreciable numbers, since their ages will range from 55 to 73. In the 12 months through April, their labor force participation rate is now up to 40.2%, a leap that puts it at a level comparable to 1960.

Since we’re talking about those numerous boomers, no account would be complete without a look at the sheer numbers involved. In 1950, there were 10.7 million people age 55 and older in the labor force. That number rose very gradually to 17.3 million by 1999. But it’s taken less than 20 years since then for the figure to more than double—to 37.7 million in 2019.

In 1999, a little over one in eight participants in the labor force was 55 or older; today it’s nearly one in four. These oldsters also enjoy an unusually low unemployment rate, at just 2.9% vs. 4% for everyone else. While Bureau of Labor of Statistics data show that they are more likely to be working part-time than those under 55, more than four-fifths work full-time.

Francese, who founded and ran American Demographics magazine before it was acquired by Advertising Age in 2004, is still at work, consulting from his home in Exeter, New Hampshire. He argues that the current figures on baby boomers in the labor force are an undercount.

Many of the old folks, he believes, are working part-time on an off-the-books basis. They are therefore not recorded as participating in the labor force, even though they qualify as participants.

Francese initially made his forecast because he believed that many boomers would choose to remain on payrolls out of concern over money. They would find they couldn’t quite afford to retire, or at least not in the style that they preferred.

In fact, as the chart shows, the labor force participation rate was already starting to rise by the mid-1990s, after falling for decades. This coincided with the gradual decline in the prevalence of defined benefit pension plans, which offer relative security in retirement. Defined benefit has been replaced by defined contribution pension plans like 401(k)’s, which offer far less security. Of course, DC plans require an affirmative decision to save, and financial advisors have been warning about the dangers of chronic undersaving for years. A 2012 study by the Social Security Administration expressed concern about "the substantial fraction of near-retirees who are estimated to have inadequate retirement savings."

A related factor: increased life expectancy, at least among the better educated who have more opportunity to keep working. "The old standard of ‘enough money at age 85’ has been extended to 90, then 95 and now 100," says Lee DeLorenzo, a wealth advisor with United Asset Strategies who has been preparing retirement projections for 35 years.

DeLorenzo also reports that she has to make allowance for rising claims on income. "The assumed ‘reduction in expenses as years advance’ is not what it used to be," she comments. "The sicker older folks must be ready to pay more for healthcare, while the healthy older folks spend like mad."

While all these factors have influenced the decisions of both men and women to delay retirement, this overall trend can also be divided into a tale of two genders. Of the 37.7 million who are age 55 or over and are still in the labor force, 20.1 million are men and 17.6 million are women. The male labor force participation rate for this cohort has jumped to 46.2% from a mid-’90s low of 37.6%, after gradually falling from a 1948 high of 70.6%.

Necessity isn’t the only factor in the decision to delay retirement. Says financial advisor Charles Zhang, CEO of Zhang Financial: "Many of my clients continue to work because they enjoy what they do. It provides a nice rhythm to their life." Adds DeLorenzo: "We see clients exercising, meditating, taking up yoga. All of this while working. The dark black line in the sand of gold-watch retirement is so yesterday."

Gene Epstein, Economics Editor at Barron’s from 1993-2018, is director of the debate series The Soho Forum.

Baby Boomers in No Rush to Retire

From
To
Message
SEND

This article has been sent to

This copy is for your personal, non-commercial use only. Distribution and use of this material are governed by our Subscriber Agreement and by copyright law. For non-personal use or to order multiple copies, please contact Dow Jones Reprints at 1-800-843-0008 or visit www.djreprints.com.